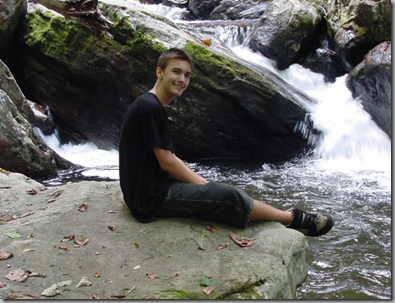 Today is the one year anniversary of Gary’s suicide.  But rather than dwelling on how he left us, I’d rather dwell on what he left us with.

You know. I wanted to make this positive and uplifting. I wanted to write, everything’s all okey dokey now. We have our memories and that’s enough and things will all work out in the end. But, perhaps a year isn’t enough time. Perhaps this isn’t the right space to show the under-belly of a horrific event. Perhaps silence is the best gift you can give.

But, I can’t be silent anymore. Gary was gay. A group of kids (mostly Jocks) were very unkind to him. I don’t know much about his home life other than his mother was supportive of him. I know my daughter would come home and tell me about the latest escapade on the bus where the ridicule and torment were getting so bad one time that she stood up and yelled “SHUT UP!!!” and actually physically went to smack a football player upside the head, or wherever she could reach. Now, my daughter is a pacifist, she’s the oldest of five and has played the role of peacemaker her entire life. She doesn’t yell. She doesn’t get mad. She doesn’t like to hurt anyone’s feelings, ever.

The WHY of what happened doesn’t matter. The HOW doesn’t matter. What matters now is honest reflection. In this community tolerance towards homosexuality is pretty much at a zero. I don’t care what religion you are, but from what I understand about Christianity Jesus said, “Love God with all your heart, mind, and might, and love thy neighbor as thyself. On this hangs all the law of the prophets.”

LOVE, not judge, not condemn, not exclude, not preach to, convert, LOVE.

This community is full of churches, a church on every corner. Yet the high-school has one of the highest rates of drug use and pregnancies in the valley, three suicides in almost as many years.

Gary had a smile for every person. The awkward outcast, the shy girl who no-one spoke to, the boy who was smaller and weaker than others…He was KIND.
Since he’s been gone I’ve been finding pennies everywhere, where-ever I go. He used to call himself “King of the Pennies.” People who knew him, loved him. It’d become a tradition for his friends to give pennies to the king of pennies. A standing joke, here’s a handful of worthless change, ha ha. Here’s a down payment for your car, ha ha.

No one knew he kept each and every penny. He saved them to give to a teacher who in turn, gave them in service of the homeless, the hungry.

By itself, a penny isn’t much of anything. A penny is a waste of space. A penny won’t buy you anything.

But whenever I see a penny now, I think of him. I pick it up. I put it away. I don’t know what I’m saving it for. I don’t know that I have as much hope or faith as Gary did, that a few pennies here and there gathered together can make any amount of difference, but God knows…if he left us in this place without him, and there are only these pennies left to remember him by, then, we have to try.

Across a Great Wilderness without You - Poets.org - Poetry, Poems, Bios & More

A "must read" poem, found via Stephen Bunch (thanks for sharing) Across a Great Wilderness without You - Poets.org - Poetry, Poems, Bios & More:
Posted by Melanie L Moro-Huber at 11:37 AM 2 comments:

If you are on fire, do not run. 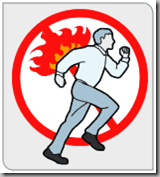 How many poets does it take to write a poem? None. Obviously a poem can write itself. Ha!

The past few days I've experienced the awkward side to the creative process: Publishing. I was invited to contribute to a book with three other poets. It was a simple question really, do you want to be published or don't you? But, I wasn't fond of the collection title. I jumped right in to the ring and started swinging. Why that title, why not THIS title?

If I didn't get a better title, I thought to myself, one that truly represented me and my work, why, I might just take my poems and go! *stomping my feet.*

I realized, on some level, my reaction was purely instinctual (and somewhat childish). Why was I feeling so overly protective towards my work? Would a title diminish what I'd spent so much time and energy creating? Was it the fact that I didn't get to pick the title myself, was I a control freak?

I asked my husband: "Would you say I'm a difficult person?"

He didn't even say anything; he just gave me a look.

My husband laughed. "Difficult, but fun, wouldn't want you any other way."

"Well, you don't always listen. It's very frustrating. You already have your mind made up before a conversation or debate even begins."

"Yes, you do. When you make up your mind about something, you won't change it for anything."

I contemplated this for a moment. I have changed my mind about some things, very drastically in the past ten years in fact. But was it true that I didn't listen? I considered the discussions we've had about politics and religion…

"I don't change my mind because I'm RIGHT." I told him.

He laughed again. "See, that's what I mean."

I've always considered myself open-minded, aware of others points of view and empathetic towards those views. But, was I—really?

I reviewed my position on the title of the book and I took myself out of the debate, got out of the way of others who have their own vision concerning the name, and threw my own ego out the window. This allowed the universe to approach me with a measure of grace. Almost.

To boil what I learned from this experience down to one sentence, I'll quote a writer friend of mine who suggested in situations like this I should just go with the flow and:

"Be grateful, not grating."
Posted by Melanie L Moro-Huber at 1:56 PM 9 comments: 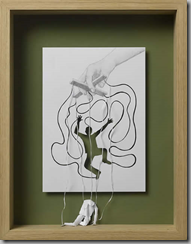 This morning I got to witness first hand the benefits of SOL testing.  My daughter, Analee, woke up five minutes late for school.  Immediate snot-flinging ensued.

“Great! I’ll never make it!  The teacher said not to be late because if we’re late we can’t take the test!” (tears)

The general “freak out” lasted about ten minutes before I was able to calm her down and assure her we still had time to get her ready.

“But I won’t even have time to eat breakfast!”  (more tears)

I reminded her that eating a bowl of cereal could be done in five to seven minutes, tops.

and out the door.

Having had five children go through the public schools systems I’ve seen about every reaction to testing there is.  None of it good.

Okay. So, I DO understand the need to measure the effectiveness of teaching but the standardized tests and the “No Child Left Behind Act” (while good in theory and a really lovely ideal) are two of the most ineffectual laws put into use today.

The result of turning learning into a product and not a process:

Cookie cutter curriculums which force individuals onto a collective middle ground leave little room or time for differential  teaching techniques geared to the more advanced or the learning challenged child.

People. Children are not all the same.   Some bright politician decided the “Core” curriculum for a third grader should include a large section on Greek Architecture.

I'll say that again because it’s so flabbergasting.

A 8-9 year old needs to learn about the different types of columns on the Parthenon?  Why? So the next time they build a Greek temple they'll be sure to use the correct columns having learned the important aesthetic of ruffled marble?

Why parents should be concerned about the SOL's

The Art of Jim Denevan 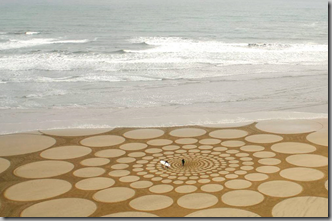 The Art of Jim Denevan:
Posted by Melanie L Moro-Huber at 3:54 PM No comments:

Get used to tacky quotes if you visit here.  You’ll see them often. Ashley, my sixteen year old often wakes in a very foul mood.  This one comes from my ten year old daughter, Analee, who nicked it from her friend Cameron, our next door neighbor.  Where he got it from I don’t know.  It’s become something of a tradition for Analee to say this to someone when that someone is particularly grumpy.

I have to admit being kind to a person who is not returning the favor can be hard, but it can also be rather funny.  Next time someone is being spiteful or negative, try the quote on them.   It works.    (It works even better when you say it while plugging your nose and crossing your eyes. )

Posted by Melanie L Moro-Huber at 11:27 AM No comments:


World of Mine Tonemah Live at the Kennedy Center