The Elementary Spelling Book (Fable I, Of The Boy Who Stole Apples) 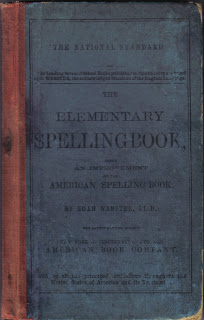 A few weeks ago I went to Pulaski, VA.   Pulaski is full of historical old relics, dilapidated railroad stations, empty store-fronts, abandoned factories.  Once a city buzzing with commerce, now just a skeleton of what was once a fully fleshed out community.  While walking around Pulaski I rambled into a pawn shop and found, next to a stack of graphite records (which I couldn't justify buying, but really wanted to) the above speller.  It was just sitting on a shelf, no other books around it, as if someone had just dropped it off there and forgotten it. 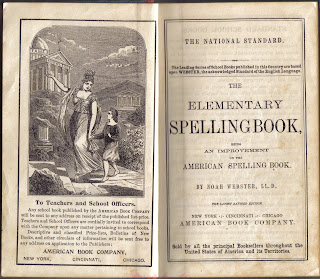 When I opened the book and saw that it was published in the 1880's by The American Book Company, my heart started pounding.  I imagined the many hands that might have held this book before me.  I sat down on the floor, right there, next to the graphite records and started searching through the pages.  The words were arranged in columns, with example sentences for grammar purposes thrown in.  The language was so archaic, I instantly fell in love. 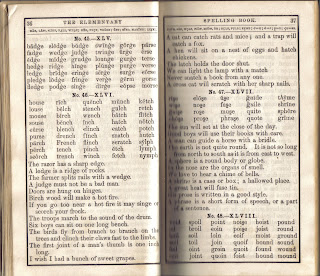 I sat there, nearly drooling over this book.  As casually as I could I got up and approached the counter.  "So, how much do you want for this?"  I tried to keep the eager gleam out of my eye and the stupid grin off my face.  The cashier barely glanced at the book.  "Three bucks." He said.  I nearly jumped up and down, but I saved that for when I left the pawn shop.

Later on, when I was investigating the history of this book I found out Noah Webster, the father of our modern American Dictionary, was the author.  (He was also the very first to obtain copyrights and to promote laws protecting author's rights in the U.S., interestingly enough.)  The book was mass published and mass marketed, also known as the Blue-Back Speller and was used in the majority of elementary school classrooms around America.

There are several disturbing images in this book, including a picture of a man being eaten by a bear and a cat being hung upside down by its tail...and a subtext of conformity relating to Puritan Christian values, with God mentioned several times and biblical quotes used as examples of words in context.

The most interesting section to me, which I may consider doing a follow up on later, is the Fables section.

For your enjoyment, Fable One: 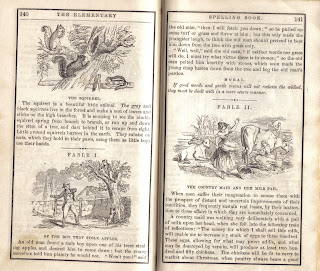 "OF THE BOY THAT STOLE APPLES.

An old man found a rude boy upon one of his trees stealing apples, and desired him to come down:  but the young saucebox plainly told him he would not.  "Won't you?" said the old man, "then I will fetch you down;" so he pulled up some turf or grass and threw at him; but this only made the youngster laugh, to think the old man should pretend to beat him down from the tree with grass only.

"Well, well," said the old man, "if neither words nor grass will do, I must try what virtue there is in stones;" so the old man pelted him heartily with stones, which soon made the young chap hasten down from the tree and beg the old man's pardon.

MORAL. If good words and gentle means will not reclaim the wicked, they must be dealt with in a more severe manner."


Now,  I wonder, WWJD?  Would He have pelted a young saucebox with rocks.  Somehow, I think not.
Posted by Melanie L Moro-Huber at 1:18 PM 4 comments: