I think I love turtles because they are green. I once saw a turtle just sitting in the center of the road, neck extended—almost questioning, worshipful, testing the air, defiant even. As the cars passed over top of him he didn’t try to move. He didn’t retreat into his shell. He just stood there, head lifted high, until the road cleared. Then, slowly, methodically he walked across to the bushes on the other side and he was gone.

I found a turtle in a field near my home. A creek runs outside my house. I couldn’t help but take his appearance to be an invitation of some sort. I picked him up and brought him inside to meet my kids. I let the turtle and the kids get to know each other. The turtle stayed in his shell for a long time while my children touched his leathery feet and smooth shell. He smelled rather funky so Analee kept her distance preferring to just observe. After they were done exploring the outer texture they set the turtle down on the floor. The turtle decided to poke his head out and get a look around. When he discovered he was surrounded by a bunch of faces ogling him, as fast a turtle can possibly run, he ran, hit the bricks, tried to get away.

I wondered what the turtle would take from this strange encounter—what it thought about being poked at and prodded. Oh, he was loved, instantly, and he could have become something cherished—at least for a week or two before they lost their awe, got used to him, and he became something common. Though the children begged to keep him I convinced them to take him back outside, to his real home.

They sent him off with a happy, “Good-bye, turtle, thanks for
visiting!” I think, in this way, Mr. Turtle will never become too easily familiar and there-by, too easily forgotten. I hope they learned to love and respect the creature and by letting him go, felt something of what it means to consider the needs of other above the needs of self.

If I teach my children anything—if they take anything from me—I hope it is this: Kindness is the most important, valuable thing we have that we can give. 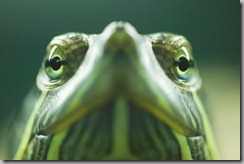 Posted by Melanie L Moro-Huber at 10:05 AM No comments: