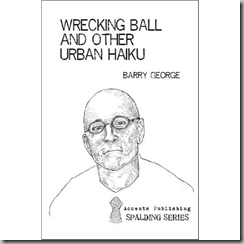 Wrecking Ball and Other Urban Haiku, Barry George, Accent’s Publishing SPALDING SERIES
Barry George’s collection honors the ancient tradition of Haiku with careful attention to form. The form lends a tangible feeling of weight to each word and yet the imagery turns and turns again from dense and earth-bound to diaphanous and spacious (quite an achievement for 17 syllables, tiny little 5-7-5 moras). Each haiku in this collection is a work of art set like a painting on the page. In many places George twists the tradition away from its roots in nature to use modern visualizations of average people in everyday life. He creates characters which reflect the universality of living, not to recreate the haiku form, but, I believe, to give homage to the past while drawing it forth into a relevant and vibrant future. Each haiku is gift, a portrait of modern life and the vitality and energy of one of the earliest forms of poetry, syllabics, which has remained vibrant through the ages, is beautifully reflected in these meticulously polished jewels.

*A note on the Spalding Collection, these books are beautifully printed and put together by hand which adds a personal element to each edition not found in many of the larger presses. The interior design is zen-like. Kudos to Accent’s Publishing for valuing the art of bookbinding as well as the crafting of poetry. 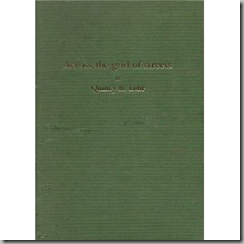 Across the Grid of Streets, Quincy Lehr, Seven Towers Publishing
I’ll start by saying I am not of big fan of neo-formalism. I’m not a fan of long poems that rhyme written after, oh, the 18th century because it seemed to me rhyme itself was a cliché’ and historically speaking, formal poetry had been used, not to capture life, truth or history but to encapsulate stories which promoted whatever political agenda (usually misogynistic in tone and patriarchal in topic) was relevant to whatever ruling cast paid the pipers (so to speak.) But okay, then. Where did that chip on my shoulder come from? I don’t know. Anyhow, I got over it. Lehr's talent with story telling draws the reader in and the pacing in his book is equal parts Wordsworth and Wilde, on crack maybe, but I mean that in a good way. Lehr also tackles the urban landscape bringing us face to face with the utter isolation of a singular vision caught up in multiple agonies. Cancer and death are topics delved with raw and unflinching clarity. These are not your momma’s lyrical love poems but the well honed lyricism I surprisingly found fitting to the topics and actually framed them in such a way which made the investment in reading worthwhile. 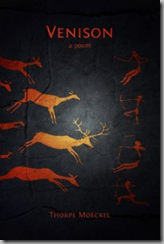 Venison: A Poem, Thorpe Moeckel, Etrusian Press
A book length poem? In couplets no less--what was he thinking!? That’s what I thought when I began reading Venison, doubtful one poem could be sustained through an entire manuscript. Well, I was wrong and pleasantly surprised. Moeckel’s Venison engages in sustainability and substance, not to mention sustenance. On the other hand, let’s mention sustenance. The poem (book) is part reverently meditative, part treatise on the natural order of life and death, predator and prey, part recipe on authentic living. There are sometimes delightful, sometimes humorous, sometimes disturbing revelations which parallel the common activities of preparing food and feeding one’s family. A fascinating journey from hoof to table, from the forests to the kitchen, from regret to gratitude with a tender reckoning of the grace and responsibility involved in each life we come in contact with.  Probably one of the most unique poetry books I've ever read. 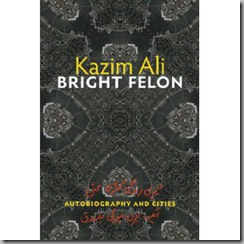 Bright Felon, Kazim Ali, Wesleyan Press
I’m not often stunned, but Bright Felon, an autobiography, stuns me. Not because the topic is a difficult one but because of the rare glimpse of torment which is balanced somehow by the ability to express that torment. Heart-wrenching, yes, but there is also beauty, yes there is much beauty here in the approach to the subject matter and in the honest, unflinching look at self in relation to tradition and what happens to the self when all the constructs of tradition began to crumble. A journey into self-acceptance, it isn’t quite clear if the journey is completed as at the end of the book Ali leaves us with the haunting missives:

Will I find myself or fine myself stopped in the street for stumbling for
not living in a place, not being bound anywhere to a family,
nation, or god...

Are you Muslim or will you love.

I will not answer.

Declaring himself separate and orphan, isolated and set adrift, there is still a hopeful tone (which I found remarkable) in the concluding two lines:

Fathered by sound I am.

Bright Felon is not your normal autobiography, prose and poetry crafted with precision and passion make this book a must read. 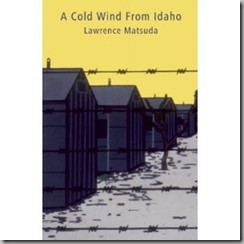 A Cold Wind From Idaho, Lawrence Matsuda, Black Lawrence Press
I’m going to gush on this one, but I’ll try hard to restrain myself and be all professional and what not. I grew up in Idaho, was taught the state history in fifth grade. We learned about the abandoned sliver mines, Lewis and Clark, Sacagawea, the Snake River and the commerce of farming; we learned Boise was the capital and the Mormon trail brought several settlers up from Utah. What I did not learn, what I knew absolutely nothing about until receiving this remarkable book was this: Mindoka. A dark secret in my home state that no one talked about. How did I not know about Mindoka??? I didn’t. It makes me feel ashamed, for myself for not knowing and for the community, the government for creating the tragedy and the schools for not even mentioning it as part of the state’s history. Mindoka was one of ten Japanese concentration camps in America during World War II. Matsuda revisits the site of his family’s captivity and reclaims his past. The poems in this book stitch together a family history which creates an epic, or an epistle of timeless importance. Matsuda delves into difficult topics, poverty, isolation, discrimination, family tragedy, with touching humor, sadness, and an elegant brushstroke of poeticism, redemption through language in a very literal sense.
Posted by Melanie L Moro-Huber at 4:26 AM No comments: