For Those Who Carry On

Remembrance. Today was set aside to think of the fallen. To pay respect to those who have carried guns in defense of ideals, in defense of other people, in defense of their comrades or their own lives. There are many stories being told about courage today. The courage it takes to leave home, to travel across the world into a foreign country and face hatred, to deal with a battle with no clear way out, without knowing when it will end or how long you will be called on, or even if you will be the one who is sent home in a pine box. To choose to live the life of an American soldier shows a strength of character which should be recognized with respect and gratitude. Military service, at the most basic level, is a self-less act. The willingness to sacrifice one's life for others, regardless of the politics or the ideals surrounding the military, is a noble desire.

The military is why we have the security we do. (It’s not the lawyers or politicians, that is for sure.) Men and women have sacrificed their lives for an ideal; the ideal of human equality and the right to exist with dignity and to respect each other without resorting to violence, even when we don’t agree. It is a wonderful thing that we can say whatever we want to say in America and not get punished for disagreeing with those in power. We are a blessed country and a lucky people to live in a place which allows us to express discontent or disagreement without our own military being used against us. Certainly, it goes without saying that it is not a perfect institution and mistakes have been made by individuals in the past and mistakes will be made in the future, no man and no man made institution is perfect. But at the heart of the majority of individuals serving in the armed forces is a person who believes in service, a person who believes one individual can make a difference, a person willing to die for others.

But there are some heroes who do not carry a gun, they simply carry on. There is of a different kind of war going on today and it is a war within the households across the world. Today, while I honor the fallen I would also like to honor the living. Please note, the images following will be disturbing to some.

WORLD IN A SNAP | Interesting images from around the world

We typically think of terrorism as a political act.

But sometimes it’s very personal. It wasn’t a government or a guerrilla insurgency that threw acid on this woman’s face in Pakistan. It was a young man whom she had rejected for marriage. As the United States ponders what to do in Afghanistan — and for that matter, in Pakistan — it is wise to understand both the political and the personal, that the very ignorance and illiteracy and misogyny that create the climate for these acid attacks can and does bleed over into the political realm. Nicholas Kristof, the New York Times op-ed columnist who traveled to Pakistan last year to write about acid attacks, put it this way in an essay at the time: “I’ve been investigating such acid attacks, which are commonly used to terrorize and subjugate women and girls in a swath of Asia from Afghanistan through Cambodia (men are almost never attacked with acid). Because women usually don’t matter in this part of the world, their attackers are rarely prosecuted and acid sales are usually not controlled. It’s a kind of terrorism that becomes accepted as part of the background noise in the region. ...

“Bangladesh has imposed controls on acid sales to curb such attacks, but otherwise it is fairly easy in Asia to walk into a shop and buy sulfuric or hydrochloric acid suitable for destroying a human face. Acid attacks and wife burnings are common in parts of Asia because the victims are the most voiceless in these societies: They are poor and female. The first step is simply for the world to take note, to give voice to these women.” Since 1994, a Pakistani activist who founded the Progressive Women’s Association to help such women “has documented 7,800 cases of women who were deliberately burned, scalded or subjected to acid attacks, just in the Islamabad area. In only 2 percent of those cases was anyone convicted.”

The geopolitical question is already hard enough: Should the United States commit more troops to Afghanistan and for what specific purpose? As American policymakers mull the options, here is a frame of reference that puts the tough choices in even starker relief: Are acid attacks a sign of just how little the United States can do to solve intractable problems there — therefore, we should pull out? Or having declared war on terrorism, must the United States stay out of moral duty, to try to protect women such as these — and the schoolgirls whom the Taliban in Afghanistan sprayed with acid simply for going to class — who have suffered a very personal terrorist attack? We offer links to smart essays that come to differing conclusions.

• In August, Perspective published a New York Times Magazine piece that followed up the story of Afghan sisters Shamsia and Atifa Husseini, who were attacked with acid simply for attending school. If you wish to refresh your memory, you may read the original article.

• Two very smart, informed observers come to opposite conclusions on the proper U.S. course of action in Afghanistan:

1. In his “Think Tank” blog at NewYorker.com, Steve Coll argues why we can’t leave — “What If We Fail In Afghanistan?” Read the essay in full.

2. In an essay entitled “The War We Can’t Win” in Commonweal (also reprinted in the November issue of Harper’s), Andrew J. Bacevich makes the case that we are overstating the importance of Afghanistan to U.S. interests. Bacevich is a professor of International Relations at Boston University and the author, most recently, of The Limits of Power. A retired Army lieutenant colonel, he served from 1969 to 1992, in Vietnam and the first Persian Gulf War. He was a conservative critic of the Iraq war. Several of his essays have run before in Perspective. Read his essay in full.

• Read the original story about acid attacks by Nicholas Kristof. 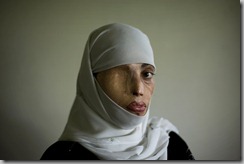 Irum Saeed, 30, poses for a photograph at her office at the Urdu University of Islamabad, Pakistan, Thursday, July 24, 2008. Irum was burned on her face, back and shoulders twelve years ago when a boy whom she rejected for marriage threw acid on her in the middle of the street. She has undergone plastic surgery 25 times to try to recover from her scars. 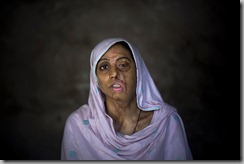 Shameem Akhter, 18, poses for a photograph at her home in Jhang, Pakistan, Wednesday, July 10, 2008. Shameem was raped by three boys who then threw acid on her three years ago. Shameem has undergone plastic surgery 10 times to try to recover from her scars. 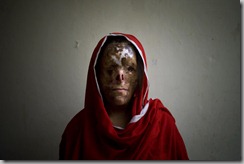 Najaf Sultana, 16, poses for a photograph at her home in Lahore, Pakistan on Wednesday, July 9, 2008. At the age of five Najaf was burned by her father while she was sleeping, apparently because he didn't want to have another girl in the family. As a result of the burning Najaf became blind and after being abandoned by both her parents she now lives with relatives. She has undergone plastic surgery around 15 times to try to recover from her scars. 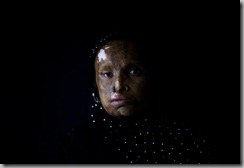 Shehnaz Usman, 36, poses for a photograph in Lahore, Pakistan, Sunday, Oct. 26, 2008. Shehnaz was burned with acid by a relative due to a familial dispute five years ago. Shehnaz has undergone plastic surgery 10 times to try to recover from her scars. 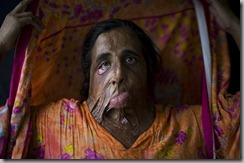 Shahnaz Bibi, 35, poses for a photograph in Lahore, Pakistan, Sunday, Oct. 26, 2008. Ten years ago Shahnaz was burned with acid by a relative due to a familial dispute. She has never undergone plastic surgery. 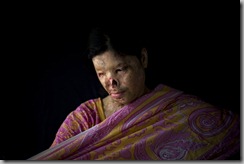 Kanwal Kayum, 26, adjusts her veil as she poses for a photograph in Lahore, Pakistan, Sunday, Oct. 26, 2008. Kanwal was burned with acid one year ago by a boy whom she rejected for marriage. She has never undergone plastic surgery. 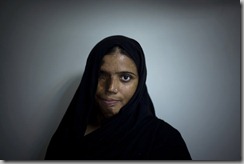 Munira Asef, 23, poses for a photograph in Lahore, Pakistan, Sunday, Oct. 26, 2008. Munira was burned with acid five years ago by a boy whom she rejected for marriage. She has undergone plastic surgery 7 times to try to recover from her scars. 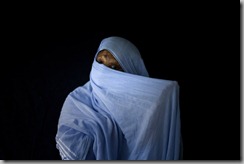 Bushra Shari, 39, adjusts her veil as she poses for a photograph in Lahore, Pakistan, Friday, July. 11, 2008. Bushra was burned with acid thrown by her husband five years ago because she was trying to divorce him. She has undergone plastic surgery 25 times to try to recover from her scars. 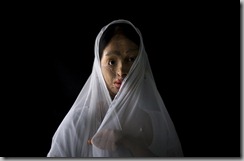 Memuna Khan, 21, poses for a photograph in Karachi, Pakistan, Friday, Dec. 19, 2008. Menuna was burned by a group of boys who threw acid on her to settle a dispute between their family and Menuna's. She has undergone plastic surgery 21 times to try to recover from her scars. 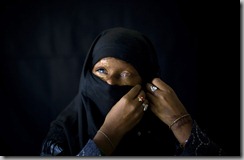 Zainab Bibi, 17, adjusts her veil as she poses for a photograph in Islamabad, Pakistan, Wednesday, Dec. 24, 2008. Zainab was burned on her face with acid thrown by a boy whom she rejected for marriage five years ago. She has undergone plastic surgery several times to try to recover from her scars. 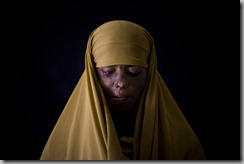 Naila Farhat, 19, poses for a photograph in Islamabad, Pakistan, Wednesday, Dec. 24, 2008. Naila was burned on her face with acid thrown by a boy whom she rejected for marriage five years ago. She has undergone plastic surgery several times to try to recover from her scars. 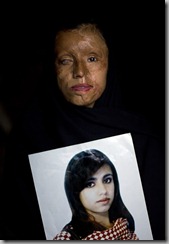 Saira Liaqat, 26, poses for the camera as she holds a portrait of herself before being burned, at her home in Lahore, Pakistan, Wednesday, July 9, 2008. When she was fifteen, Saira was married to a relative who would later attack her with acid after insistently demanding her to live with him, although the families had agreed she wouldn't join him until she finished school. Saira has undergone plastic surgery 9 times to try to recover from her scars. 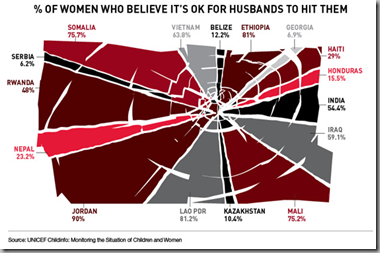