I’ve always thought of revelation as a divine manifestation of truth which comes in some dramatic form, a combustible bush, a tub-thumping, thunder rumbling voice from above, a moment extremely dramatic in nature which elevates its place in time beyond the present moment. A- GONG- of eternity if you will, a wind chime echo into forever, not just the pebble dropped to ripple in the pond but the pond in the ripple. All-encompassing. Rare. Special.

Maybe revelations are more like leafs falling off trees, so ordinary and plentiful that unless you look closely and pay attention you don’t notice the patterns of sun and shade, the prism of light caught in the morning dew clinging to the last stubborn maple leaf-clinging to the tree, or the way the wind turns a pile of them into a tornado of color. You laughed at this when you were younger, do you remember?

Do you still laugh? Do you see each leaf, or just a pile of waste?

Hope is a frightening thing.  When we kill wonder we don’t have to worry about hope.

Several years ago when my family was still new and small we went camping in Kentucky. It was early fall, the fields were freshly harvested and plowed. The earth smelled clean in a way that it can only smell when the air is so cold the inside of your nose twinges a bit when you breathe it in.

Our friends told us they often went arrowhead hunting when the fields were freshly plowed and this seemed like a splendid idea to me. Not to my husband. While I spent, oh at least a half a day walking the fields, keeping my eyeballs to the dirt, he preferred to stay in camp. I was annoyed at first that he didn’t care to join me on my quest but I got into my imagination and thought of who might have left arrowheads there, what they were doing, what happened to them. I began to say silent prayers, humming what I imagined was a Native American way of humming, hey ay ay ay, ho ay ay ay, softly to myself as I bent to pick over yet another clump of-looks-more- like- a- rock-dirt.

I lost track of time, I felt the sun begin to heat my face and arms and I wrinkled my nose up at it. Ouch, yup. I was getting fried. I was determined that I would absolutely not leave that field until I found an arrowhead. There was one there, I could feel it. I got into some kind of zone. Time didn’t mean anything. I ignored the rumble in my stomach. Forgot all about the people I was camping with and imagined the field in which I stood as it had looked a few hundred years ago.

“If I were an arrowhead, where would I be?” I found some rocks that were more granite and obsidian than dirt-clods and every time I found one my heart would pound and I would think, this is it. Each rock was THE ONE. This is it. No, toss. THIS is it. No. Toss. This one. No, this one. I lost myself completely in the process.

I finally found one. It was a beauty, too large to be only an arrow, it looked more like a spear tip. It was a deep gray and a contradiction of itself because although it was very sharp with hard edges it was butter smooth. It felt like magic. I felt like magic because I found it.

Fast forward twelve years. Our family is much larger. Five kids. We’ve hopped around a couple states and settled in Virginia. I didn’t have much time for things like hunting arrowheads, or showers for that matter. My husband and I were coaching a soccer team. It was a new soccer field and the grass was sparse but the rocks were plentiful. We were gathering as many rocks off the field as we could to make the area more safe for running when he found one. Just like that. He wasn’t even looking. He brought me over this beautiful white quartz triangular shaped rock.

“Hey! Is this an arrowhead?” 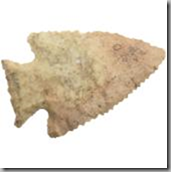 I took it my hands. A moment of intense jealousy reared up from somewhere deep. It was absolutely gorgeous. The edges were very thin, slightly chipped. It wasn’t as smooth as mine had been and much smaller. I doubt I would have recognized it for what it was if he hadn’t of placed it right in my hands. I recalled the effort it took for me to find “my” arrowhead. Why did he get to find one just like that, no hard work, no hours put in combing the ground, just bending over picking up rocks and there it is? That’s so not fair!

“Yup.” I said dryly, handing it back to him.

I held it in my hands feeling slightly ashamed. Didn’t he understand what he’d just done? Didn’t he know how difficult finding one of those could be? How unique? How special?

He went off, gathering more rocks and tossing them off the field and I put the arrowhead in my pocket and stared after him, bemused.

I've thought about these two moments a lot over the years and I used to think that maybe he and I were just on different paths that led to the same place. I didn’t understand his way and he just didn’t understand mine. Maybe finding that arrowhead wasn’t so special or momentous. I worked, I looked I found it. He wasn’t looking and he found one and didn’t think much about it.

Lately these moments have come to my memory again and again but for some reason it’s finally (after so many years!) come to me, more of a –ping- than a –GONG-, and it’s a lesson I’ve learned before and seem to have to keep re-learning, maybe that’s what a revelation is, more or less, a full understanding of something we’ve not understood before.

What occurred to me was that my husband was just doing what he normally does, no one asked him to clear rocks from the field. He saw that there was a possibility that a child could get hurt so without thought to what was in it for him, or what he could get out of the situation, he just started picking up rocks and making the place safer. He wasn’t asking to be blessed, he wasn’t asking for anything. He was just paying attention and doing what needed to be done. While in my case I was most certainly expecting a blessing, looking for something, certain I’d find it. I’m not sure one way is better than the other because I know that when I found the arrowhead I was transported, in awe, it was a profound almost mystical moment for me. I held the arrowhead in my hands and felt the history, imagined the ghosts of the past whispering in my ear, approving my find. For him, it was an arrowhead, a rock on the field, a pretty trinket his wife might like.

His only joy in the find was in giving it to me.

Posted by Melanie L Moro-Huber at 8:58 AM